Yup, it’s sunny outside. And now i’m back inside for the next session. Fortunately, or unfortunately, this session is once again in a below ground room with no windows so I will not be basking in sunlight nor gazing longingly out the window. I guess I’ll be paying full attention to another really great topic.

conditional vs unconditional incentives: comparing the effect on sample composition in the recruitment of the german internet panel study GIP

evolution of representativeness in an online probability panel

the pretest of wave 2 of the german health interview and examination survey for children and adolescents as a mixed mode survey, composition of participant groups

Live blogged at #ESRA15 in Reykjavik. Any errors or bad jokes are my own.

I’ve been pulling out every ounce of bravery I have here in Iceland and I went to the pool again last night (see prevoius posts on public nakedness!). I could have also broken my rule about not traveling after dark in strange cities but since it never gets dark here, I didn’t have to worry about that! The pool was much busier this time. I guess kiddies are more likely to be out and about after dinner on a weekday rather than sunday morning at 9am.  All it meant is that I had a lot more people watching to do. All in all good fun to see little babies and toddlers enjoying a good splash and float!

This morning, the sun was very much up and the clouds very much gone. I’ll be dreaming of breaktime all morning! Until then however, i’ve got five sessions on sample composition in online surveys, and representativeness of online studies to pay attention to. It’s going to be tough but a morning chock full of learning will get me a reward of more pool time!

Randall Thomas at #esra15 shows means across non-prob and prob. based polls are similar. To me, only option if you don't need precision.

Peter Linde quotes Chinese proverb wrt repr web panels: "it doesn't matter what color a cat is as long as it catches nice" but… #esra15

measuring subjective wellbeing: does the use of websurveys bias the results? evidence from the 2013 GEM data from luxembourg

Today’s lunch included vanilla Skyr. Made with actual vanilla beans. Beat that yoghurt of home! Once again, i cannot choose a favourite among coconut, pear, banana, and vanilla other than to say it completely beats yoghurt. I even have a favourite brand although since I don’t have the container in front of me right now, I can’t tell you the brand. It still counts very much as brand loyalty though because I know exactly what the container looks like once I get in the store.

I have to say I remain really impressed with the sessions. They are very detail oriented and most people provide sufficient data for me to judge for myself whether I agree with their conclusions. There’s no grandstanding, essentially no sales pitches, and I am getting take-aways in one form or another from nearly every paper. I’m feeling a lot less presentation pressure here simply because it doesn’t seem competitive. If you’ve never been to an ESRA conference, I highly recommend it. Just be prepared to pack your own lunch every day. And that works just great for me.

I decided to take the plunge and choose a session in a different building this time. The bravery isn’t much to be noted as I’ve realized that the campus and buildings and rooms at the University of Iceland are far tinier than what I am used to. Where I’d expect neighboring buildings to be a ten minute walk from one end to the other, here it is a 30 second walk. It must be fabulous to attend this university where everything and everyone is so close!

I’m quite loving the facilities. For the most part, the chairs are comfortable. Where it looks like you just have a chair, there is usually a table hiding in the seat in front of you. There is instantly connecting and always on wifi no matter which building you’re in. There are computers in the hallways, and multiple plugs at all the very comfy public seating areas. They make it very easy to be a student here! Perhaps I need another degree?

polls on national independence: the scottish case in a comparative perspective

Scotland situation: 'People may agree with the demands of the nationalist parties but not with the solution they propose' @tnsbmrb #esra15

how good are surveys at measuring past electoral behaviour? lessons from an experiment in a french online panel study

Well, last night i managed to stay up until midnight. The lights at the church went on, lighting up the tower and the very top in an unusual way. They were quite pretty! The rest of the town enjoyed mood lighting as it didn’t really get dark at all. Tourists were still wandering in the streets since there’s no point going to bed in a delightful foreign city if you can still see where you’re going. And if you weren’t a fan of the mood lighting, have no fear! The sun ‘rose’ again just four hours later. If you’re scared of the dark, this is a great place to be – in summer!

Today’s program for me includes yet another sessions of question data quality, polling question design, and my second presentation on how non-native English speakers respond to English surveys. We may like to think that everyone answering our surveys is perfectly fluent but let’s be realistic. About 10% of Americans have difficulty reading/writing in English because it is not their native language. Add to that weakly and non-literate people, and there’s potential big trouble at hand.

the optimal number of categories in item specific scales

Live blogged at #ESRA15 in Reykjavik. Any errors or bad jokes are my own.

The sun is out again and I took a quick walk outside. I am thankful my hotel is at the foot of the famous church. No matter where I am in this city, I can always, easily, and instantly find my hotel. No map needed when the church is several times higher than the next highest building!

I’ve noticed that the questions at this conference are far more nit-picky and critical than I’m used. I suspect that is because the audience includes many academics whose entire job is focused on these topics. They know every minute detail because they’ve done similar studies themselves. It makes for great comments and questions, though it does seem to put the speaker on the spot every time!

What do survey Rs do when getting the wrong instructions on a scale? Ignore instructions and use the labels. I Becher #esra15

Becher: Keep it simple! Scale instructions in the question stem are superfluous if scale labels are also shown in the answer. #esra15

from web to paper: evaluation from data providers and data analysts. The case of annual survey finances of enterprises

is variation in perception of inequality and redistribution of earnings actual or artifactual. effects of wording, order, and number of items

exploring a new way to avoid errors in attitude measurements due to complexity of scientific terms: an example with the term biodiversity

[if any of these papers interest you, i recomend finding the author on the ESRA program and asking for an official summary. Global speakers and weak microphones makes note taking more challenging. 🙂 ]

I tried to stay up until midnight last night but ended going to bed around 10:30pm. Naturally, it was still daylight outside. I woke up this morning at 6am in broad daylight again. I’m pretty sure it never gets dark here no matter what they say. I began my morning routine as usual. Banged my head on the slanted ceiling, stared out the window at the amazing church, made myself waffles in the kitchen, and then walked past the pond teaming with baby ducks. Does it get any better? I think no. Except of course knowing i had another day of great content rich sessions ahead of me!

Dr Ainsaar: 5 indicators to keep in mind if you want to maximise quest. readability in int'l comp. surveys #esra15 pic.twitter.com/AKV05EZLpf

And this is why it is a bad idea to use drop box questions. Mick Couper shows it is better to use text boxes. #esra15 pic.twitter.com/D52fiuZrdw

Live blogged at #ESRA15 in Reykjavik. Any errors or bad jokes are my own. Break time brought some delightful donuts. I personally only ate one however on behalf of my friend, Seda, I ate several more just for her. By the way, since donuts are in each area, you can just breeze from one area to the next grabbing another donut each time. Just saying… 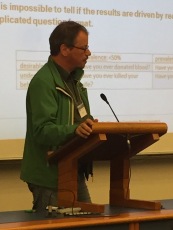 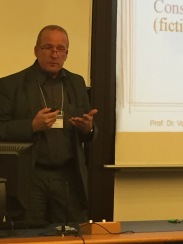 Live blogged at #ESRA15 in Reykjavik. Any errors or bad jokes in the notes are my own.

I discovered that all the buildings are linked indoors. Let it rain, let it rain, i don’t care how much it rains….  [Feel free to sing that as loud as you can.] Lunch was Skyr, oat cookies and some weird beet drink. Yup. I packed it myself. I always try to like yogurt and never really do. Skyr works for me. So far, coconut is my favourite. I’ve forgotten to take pictures of speakers today so let’s see if I can keep the trend going! Lots of folks in this session so @MelCourtright and I are not the only scale geeks out there . 🙂 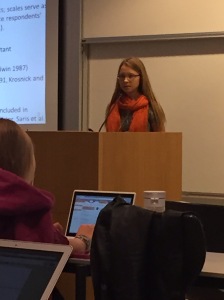 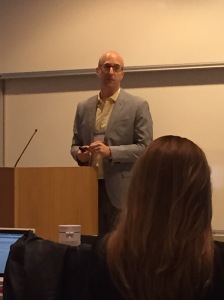 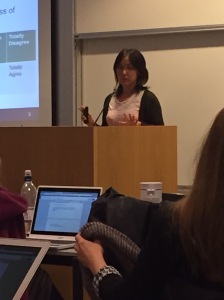 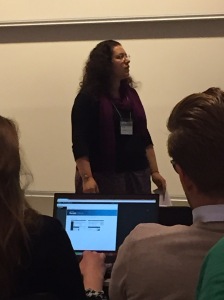 Live blogged from #ESRA15 in Reykjavik. Any error or bad jokes in the notes are my own. As you can see, I managed to find the next building from the six buildings the conference is using. From here on, it’s smooth sailing! Except for the drizzle. Which makes wandering between buildings from session to session a little less fun and a little more like going to a pool. Without the nakedness.

Session #1 – Data quality in repeated surveys: evidence from a quasi-experimental design by multiple professors from university of Rome

Asking for phone number at the beginning doesn't affect responses but ppl who give number respond differently, study by @LoveStats #esra15